Don’t let this happen to you!!! 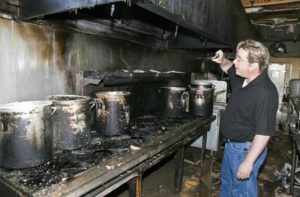 According to U.S. official reports, there are more than 5,500 restaurant fires each year, which cost upwards of $115 million in property damages. Is the kitchen on your restaurant more likely to catch fire than average?

Restaurants are full of potential fire hazards, including both items that could spark a fire and items that could fuel it. For example, a fire could be sparked by an open flame, a faulty electrical connection, or hot cooking equipment. That fire could then feed on any number of fuel sources such as cooking oils, grease buildup, cleaning chemicals, and paper products.

The majority of restaurant fires are started, unsurprisingly, bin the kitchen by cooking equipment. More surprising, is the fact that failure to properly clean equipment is a factor in 1 in 5 restaurant fires (according to data from the NFPA from 2012).

Here are some of the most common reasons commercial kitchen fires happen and a few tips on how to prevent them.

The main purpose of exhaust hoods is to get rid of extra smoke, grease, gas, and odours, but they also play an important role in ensuring your kitchen is safe. The exhaust hoods over your cooking equipment do get hot! In some cases, they may get so hot that any grease that has accumulated on them could be in danger of igniting into a flash fire.

If you allow grease to accumulate on your hood filter, it will create a serious fire hazard. To prevent this issue, clean your hood regularly. One of the most effective methods of hood filter cleaning is the Spectank.

30 minutes in the SpecTank followed by a quick rinse will be better than hours of caustic soda and high pressure steam cleaning! Read more about the Spectank and hood filters…

Most kitchens use rags to wipe all sorts of stuff, including flammable things like oil and grease. If you allow these rags to stack up, they could be creating a serious fire hazard. According to the National Fire Protection Agency, more than 20% of restaurant fires are caused by grease accumulation. The best way to prevent this risk is to ensure that all used rags are placed in a non-flammable laundry bin that’s located outside your kitchen area.

Not having the right fire equipment

The reality is that there’s a lot of heat and direct fire in a kitchen. You can’t remove every possible source of fire. That’s why it’s essential to have a fire suppression system. The systems available are usually prepiped and ready for a variety of exhaust hood packages. In the event of a fire, they can prevent it from spreading throughout and can help it be contained quickly and easily.

Of course, you should also have fire extinguishers within easy reach of any of your hot surfaces. Make sure that every single employee both knows where they’re kept and how to use them.

There are many reasons to ensure your kitchen is always up to code. While you may focus on not getting customers sick and avoiding fines from the health department, it’s also smart to carefully consider the health codes that deal with electrical wiring. Maintenance guidelines are set out by OSHA and give you minimum standards to follow, as well as additional steps you can take to make sure your wiring is up to code.

And check out the NFPA for more up to date research: NFPA

How To Clean a Greasy Range Hood Filter with the SPECTANK

How the Spectank will cut Kitchen costs and improve efficiency

How the Spectank will cut Kitchen costs and improve efficiency

Can you imagine what the world would ...
END_OF_DOCUMENT_TOKEN_TO_BE_REPLACED

How To Clean a Greasy Range Hood Filter with the SPECTANK

We are excited to announce the launch ...
END_OF_DOCUMENT_TOKEN_TO_BE_REPLACED